Written by Jason Langenauer
Updated over a week ago

TimeZest's workflows are the single biggest change we've made to TimeZest since it launched. They'll offer you unparalleled visibility into what TimeZest is doing, and provide an entirely new degree of customization to get TimeZest to work exactly the way you want.

I should point out that if you're happy with how TimeZest currently works, then nothing is going to change (with the exception of a couple of controls in the appointment type screen moving to different places). It will work exactly the same for your technicians and dispatchers, as well as your clients, as it has always done.

But now, TimeZest can do so much more.

Fundamentally, workflows break almost everything TimeZest does into triggers and actions, which reflect what TimeZest actually does:

So why did we make these changes?

Firstly, we wanted TimeZest to be much clearer about how it operates. We like to think that TimeZest has a certain amount of "magic" in it, where things that people expect to happen - notes being written to tickets, statuses being updated - simply happen. But as TimeZest has grown to become a more full-featured and complex product, it's becoming increasingly hard to fully comprehend exactly what TimeZest is doing. So with workflows, we've made it explicit. You can see exactly what TimeZest is doing, and when.

As well, we've introduced a far more comprehensive audit trail in TimeZest, where every action in a workflow is guaranteed to leave an entry, even if it fails. This will give you far more insight into what TimeZest has done, and if anything has gone wrong during scheduling, you'll be able to see clearly why: 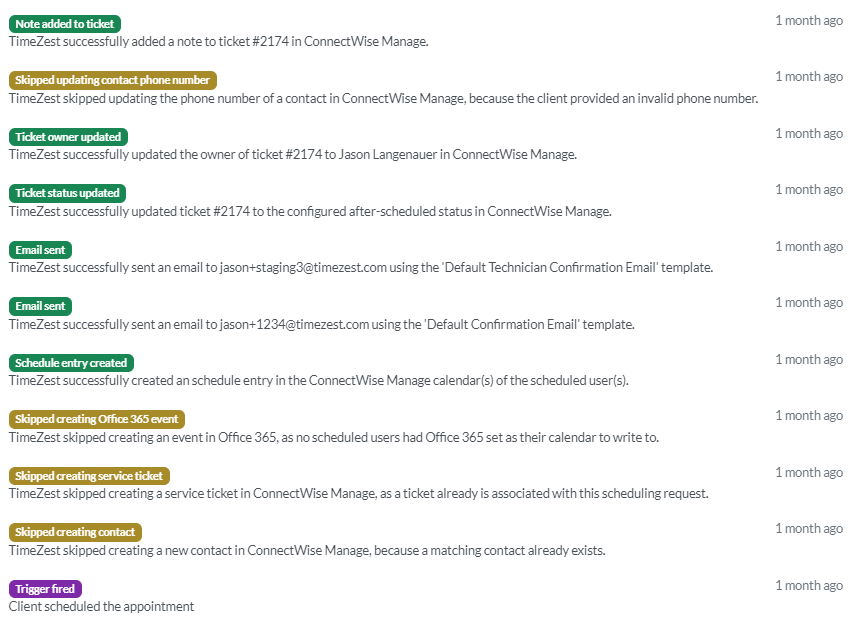 Secondly, we wanted to give our users a huge new level of customization to ensure TimeZest works exactly how you want it to. Until now, the TimeZest scheduling process has been "one size fits all", which has become more and more difficult to maintain. Both ConnectWise Manage and Autotask provide their users with the power to run their business in many ways, and we wanted TimeZest to match that flexibility. So now you can change what TimeZest does - the emails it sends and when, the notes it writes to your tickets to match your way of working. Additionally, you can have different appointment types do entirely different things.

An example: at the moment, TimeZest does not write a note to a ticket when it sends a reminder email to a client who hasn't scheduled. Some of our customers have requested this, and with workflows, it's easy: simply add an "Add Note to Ticket" action to the trigger that sends the reminder email, and you're good to go.

Finally, we wanted to get TimeZest ready for building new features in the future. The "trigger and actions" architecture allows us to build new triggers and actions without having to decide for our customers how to integrate them into the "one size fits all" scheduling process, which was becoming a major difficulty for us. For example, if we were to upgrade the Microsoft Teams integration to allow TimeZest to post a notification to a Teams channel, how should we integrate that with existing appointment types in order to please everyone? Now, we can build the action, and it's up to you where you want to use it - when an appointment is requested from the pod, when the client schedules or when a client cancels their appointment.

We're practically buzzing with ideas of new things we can build for you. Things like the following are amongst the first new features we're going to release to build on this new architecture:

And lots more as well.

This is the biggest change to TimeZest since we launched 3 years ago, and we really hope that it will make TimeZest even more useful for you than it already is.

What to look at next

Did this answer your question?